The importance of epithelial cells 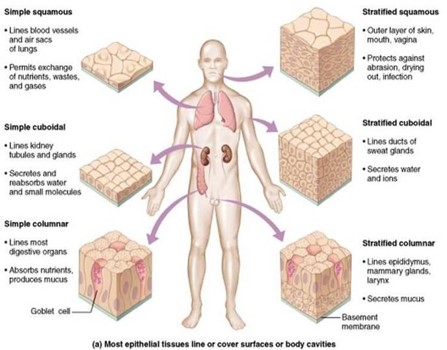 Epithelial cells comprise over 70% of all cells in the body where they function to form the barrier that protect the outside and inside of our bodies from invading pathogens, toxins, particulates, and other unwanted infectious substances. They maintain critical metabolic functions such as movement of nutrients, electrolytes and waste products in a controlled and directionally correct manner. They are involved in key functions performed by most of the internal organs as well. Conversely, malfunction in epithelial cells is responsible for a wide spectrum of diseases that affect skin, airway, the gastrointestinal tract systems, to name a few.

Despite the critical role epithelial cells play in maintaining health and in contributing to diseases in vivo, it is still surprisingly difficult to study them in vitro. For that reason, many attempts have been made to create the in vitro models of cells and tissues during the past several decades. These approaches include primary cells, continuous cell lines, embryonic stem cells and induced pluripotent stem cells.

Primary epithelial cells can be isolated from healthy and diseased living or cadaveric donors rather readily, although supply is limited. When placed in cell culture conditions, primary cells have relatively short life spans, a limited ability to divide, and rapidly lose key physiological functions. Even tumor cells are difficult to maintain and expand in vitro, and they also lose important properties of the tumors when placed in culture.

Continuous cell lines, either spontaneously formed or genetically created from tumors or healthy donors, have been predominately used by researches and pharma scientists for in vitro studies until now. Thousands of continuous cell lines have been created by a) selecting for spontaneous mutant cells adapted to growth in monolayer cultures on plastic, b) introducing the telomerase reverse transcriptase (TERT) gene into primary cells, thereby preventing senescent cells to exceed the Hayflick limit and become potentially immortal, or c) introducing genes from cancer-causing viruses to create continuous cell lines. While such cell lines have been used for decades to study both normal and pathobiology in vitro, they have significant limitations. For example, continuous cell lines contain multiple chromosomal abnormalities, and they no longer express many of the functional properties representative of the tissues from which they were derived. Therefore, these cell cultures have limited physiological relevance, even in relation to the study of cancer biology.

Embryonic stem cells (ESCs) have the remarkable ability to form every cell type in the body, but ethical concerns and legislation against using embryos have raised significant hurdles. A new approach, discovered by Shinya Yamanaka in 2004, is the creation of induced pluripotent stem cells (iPSCs). These cells have almost the same plasticity, or ability to be induced to differentiate, into almost any adult cell type. This is accomplished by the introduction of several genes called reprogramming factors that cause adult cells to become more like cells from embryos. However, iPSC cultures are difficult to establish, maintain, expand and differentiate; and the related costs often preclude iPSCs from relevant high-throughput and complex studies. They also exhibit genomic instability and have potential for generating tumors in host organisms.

Some types of epithelial tissues contain tissue-specific, lineage-committed stem cells whose functions are 1) to replenish progenitor cells types required to replace cells lost during normal tissue turnover, remodeling, and repair, and 2) to replace themselves, in order to maintain a continuous supply of tissue-resident stem cells for future use.